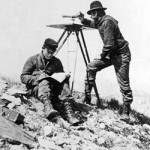 This site is intended to provide you with information on a Land Surveying Company in Newnan, GA. If you’re looking for a Newnan Land Surveyor, you’ve come to the right site. If you’d rather talk to someone about your land surveying needs, please call (678) 552-2824 today. For more information, please continue to read. 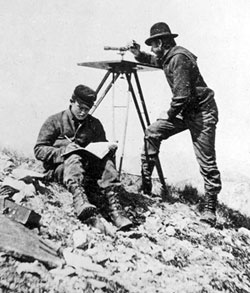 Land Surveyors are professionals who measure and make precise measurements to determine the size and boundaries of a piece of real estate.  While this is a simplistic definition, boundary surveying is one of the most common types of surveying related to home and land owners. If you fall into the following categories, please click on the appropriate link for more information on that subject:

If your needs don’t fall into one of the above, don’t worry, we’ll get to the bottom of it. CALL Newnan  Land Surveying TODAY at (678) 552-2824 OR better yet, fill out a Contact Form request to discuss your survey needs. 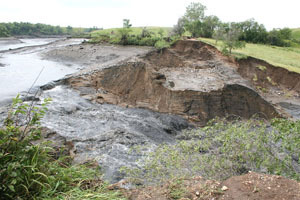 The Daily Republic in South Dakota published an article that talks about an earthen dam that recently failed because of a nine-inch rainfall last 29th of July 2010. The heavy rainfall overwhelmed the dam’s capacity causing it to fail.

No injury was reported on the said event. The said damn was built in 1935, as were a number of them during the Work Programs after the Great Depression. In 2007, it was inspected by a Department of Game, Fish and Parks Engineer and he noted that they “were satisfied with the condition of the dam” during that time. It was then again inspected in 2008 and it was said that the dam breach “was caused by an extraordinary natural event and not by any structural weakness in the dam.” (Photograph by Laura Wehde/The Daily Republic).

Earth dams are almost too numerous to count around the country. In fact, you might just be living near one without you knowing it. A great percentage of these dams were built over 70 years ago and, in many cases, the owners today were not the same ones when they were initially built. For this reason, maintenance and inspection of these dams became less popular.

FEMA estimates “there are over 80,000 dams in the United States”, and that approximately “one third of these pose a ‘high’ or ‘significant’ hazard to life and property if failure occurs.”

The South Fork dam, the country’s worst dam failure disaster in May of 1889, took over 2200 lives and almost half of which were under 20 years old. This incident happened in the town of Johnstown, PA, thus it was known as the “Johnstown Flood”. A 37-foot high wall of water hit Johnstown, located 9 miles downstream from the dam. It almost destroyed the entire city as 1600 homes and 280 businesses was flushed away.

In March 1928, the St. Francis Dam in California also failed. This caused a legislation to be enacted in and around the said state. This, and other later legislation led to life-saving advance warning when the Baldwin Hills dam near Los Angeles, California failed on December 14, 1963. Because of the advance warning which enabled the evacuation of approximately 16,500, the casualties from dam failures has significantly decreased to 5 individuals

Even though there have been far less loss of lives in the United States from dam failures since the 1970’s, reports that…

Of course, It should be noted that the failure of the earthen levees near New Orleans, LA during and after Hurricane Katrina are purported to be responsible for killing more than 1000 people.

Failure in The KaLoko Dam on the Island of Kauai, Hawaii in March 2006 has resulted to the death of 7 people. Two years after the said incident, developer James Pfluegar was indicated for manslaughter and reckless endangerment in relation to the dam failure. The incident had caused the country of Kauai and the State of Hawaii to pay out over $9 Million in of lawsuits after the failure.

Cause of Dam Failures

Heavy rains cause overtopping, which is by far the most common cause of dam failures. Dam spillways and structures are typically not designed for more than a 1-percent chance (aka 100-year) storm event. When a rain event exceeds this, the water starts to travel outside of the control spillway. This causes erosion of the soil on the dam from the excessive amount of water traveling over it. It is also possible for overtopping to occur from smaller rain events because of debris blockage of the outlet structure or spillways or because of settlement of the dam crest.

Foundation defects, including settlement and slope instability, cause about 30% of all dam failures.

Seepage or Piping causes the remaining 20% of the U.S. dam failures. Piping is the internal erosion caused by seepage under and through the dam. This usually happens around structures such as pipes through the dam and spillways. Seepage can also be caused by animals, like beavers, muskrats, groundhogs, and other rodents, burrowing in the dam, by roots of trees growing on the dam, and through cracks in the dam.  All earth dams have seepage resulting from water permeating slowly through the dam and its foundation. But this seepage must be controlled or it will progressively erode soil from the embankment or its foundation, resulting in rapid failure of the dam.

What Should You Do To Protect Home?

Since the failure of a dam causes flood, your best option is to avoid building in a flood zone, unless you elevate and reinforce your home. Have your area surveyed and investigated for dam failure and flood determination so you’ll know if your dream house is safe to be constructed in that certain area.

Do you live downstream from a dam? Is the dam a high-hazard or significant-hazard potential dam? To find out, contact your state or county emergency management agency and/or visit the National Inventory of Dams. There are around 5,132 dams on the National Inventory in Georgia. And among those, 640 are listed as high or significant hazard potential dams.

If you live downstream from one of these dams, find out who owns and regulates the dam. This information should also be available from the National Inventory of Dams.

Next, find out if there is an Emergency Action Plan in place. Again, consult your state or county emergency management agency. (Georgia Environmental Protection Division)

If you want help with investigating a piece of property you are considering purchasing or of one you already purchased, please call Newnan Land Surveying today at  (678) 552-2824 or fill out a contact request form.